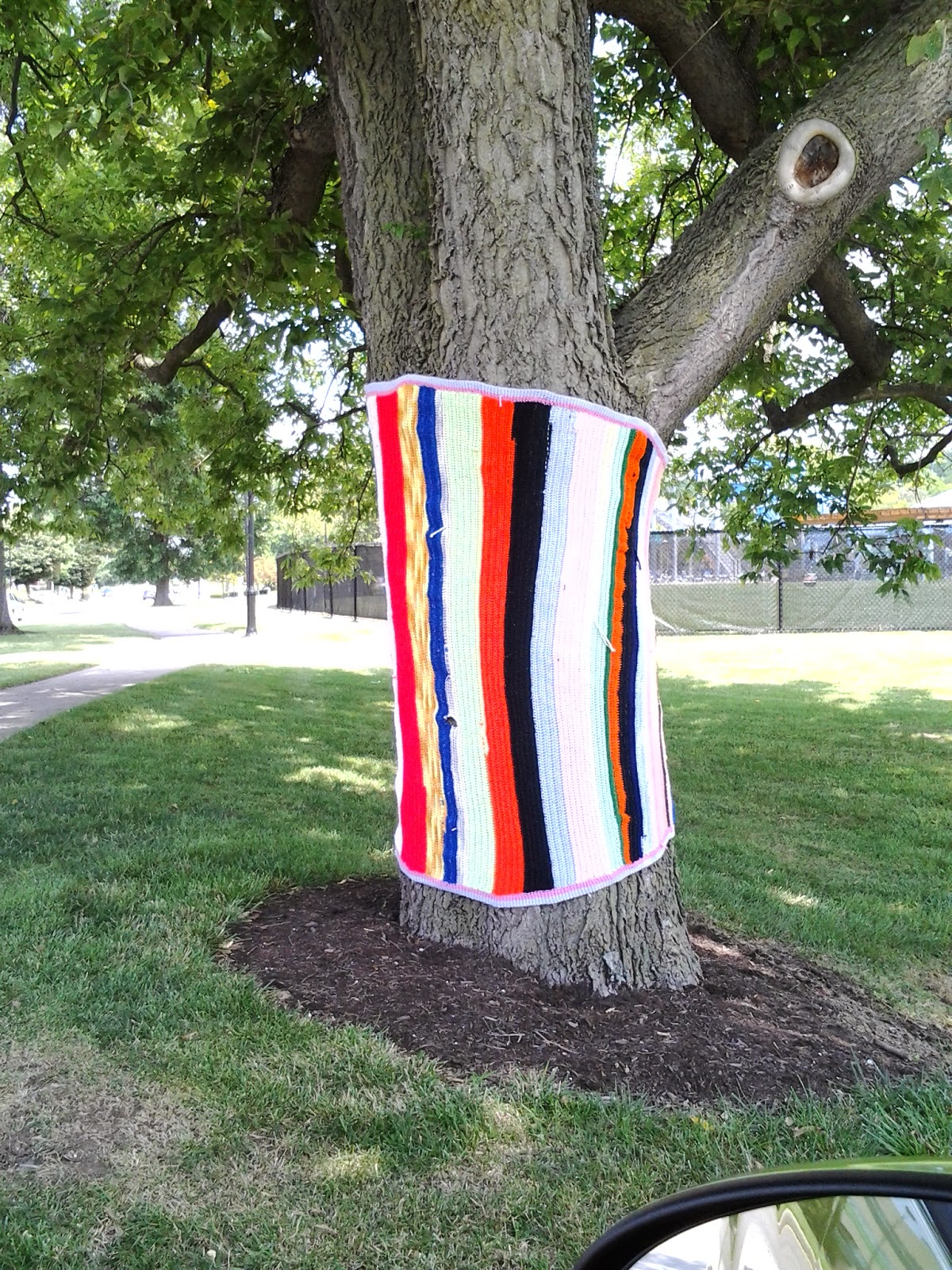 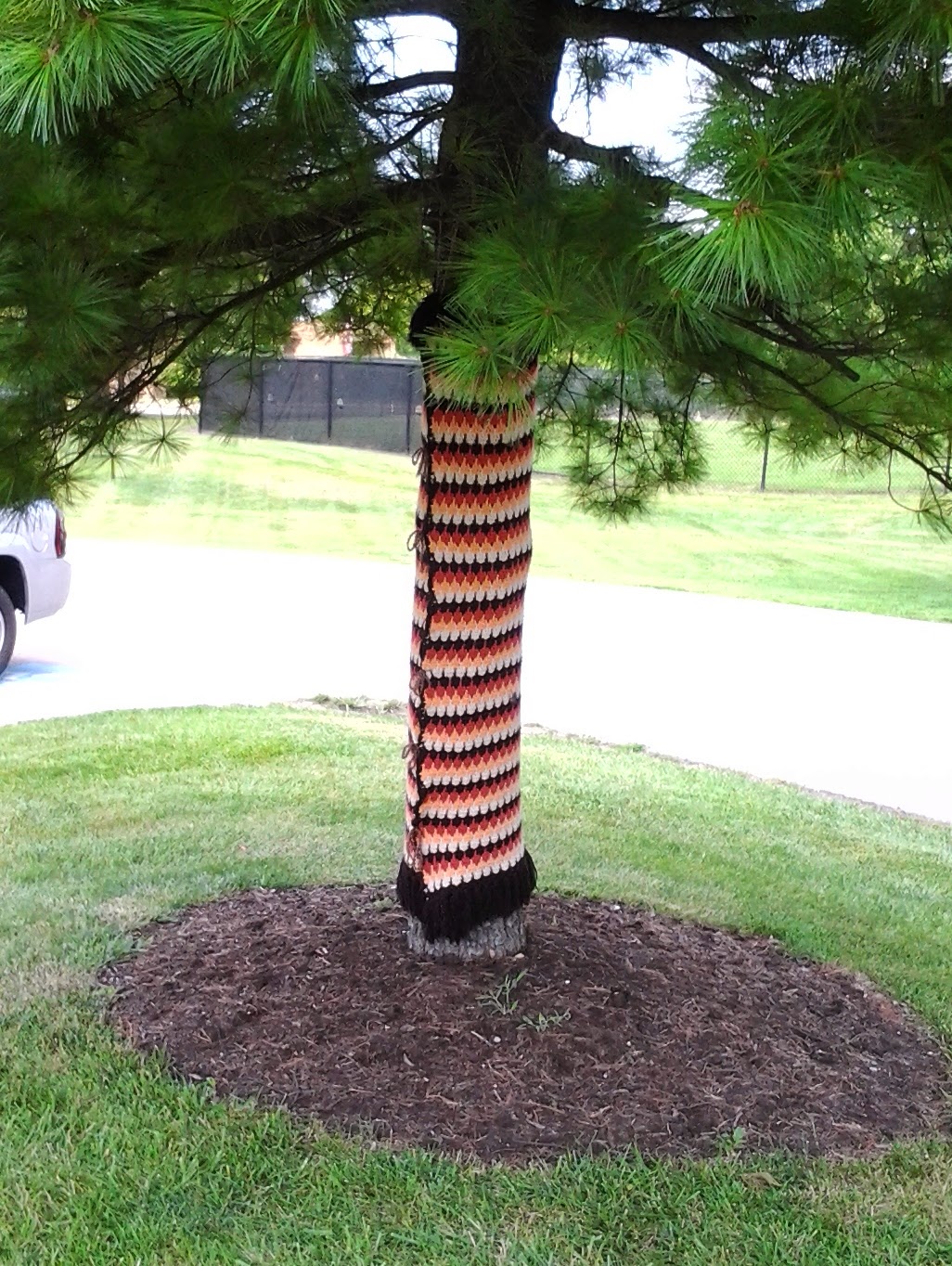 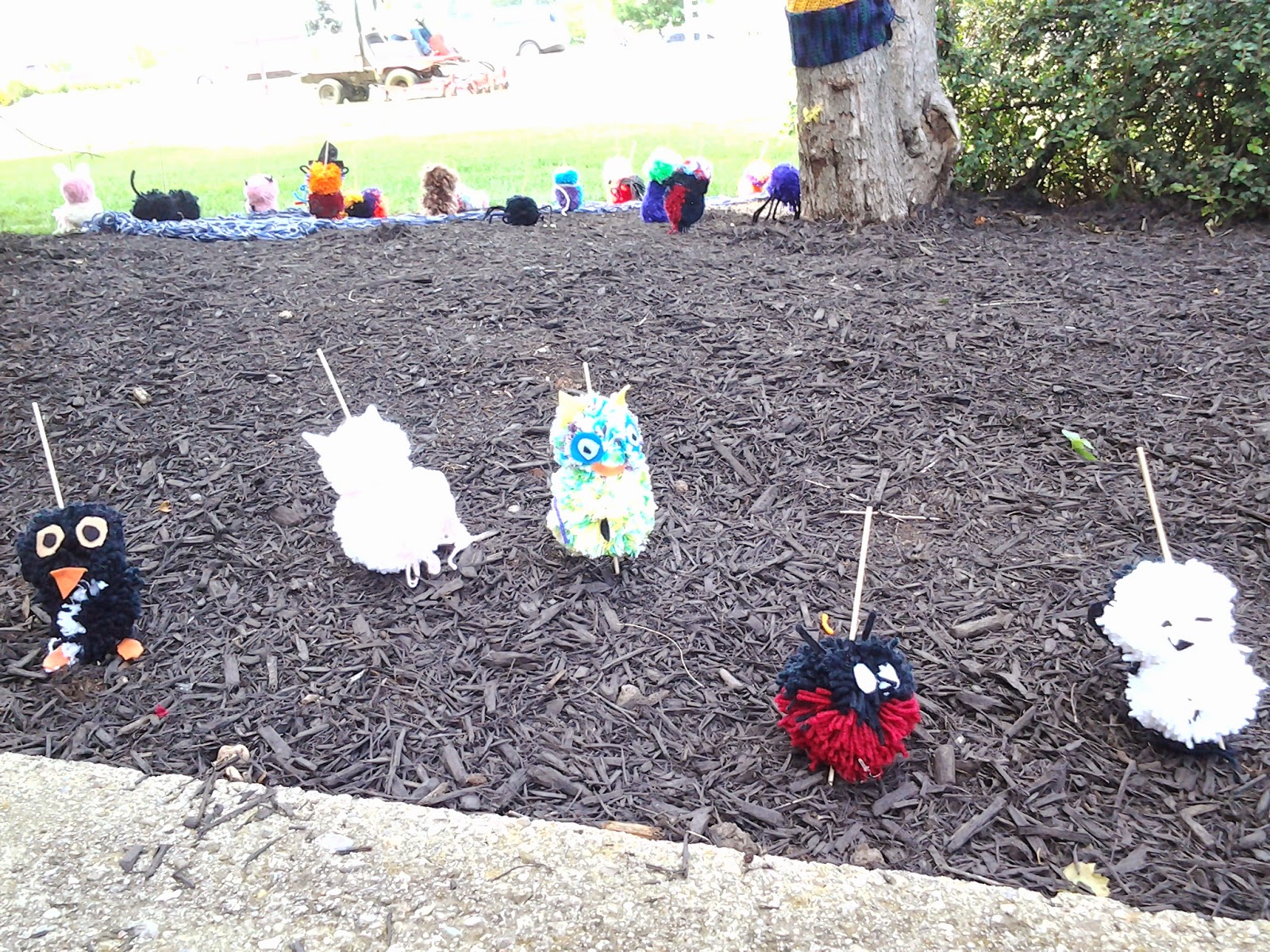 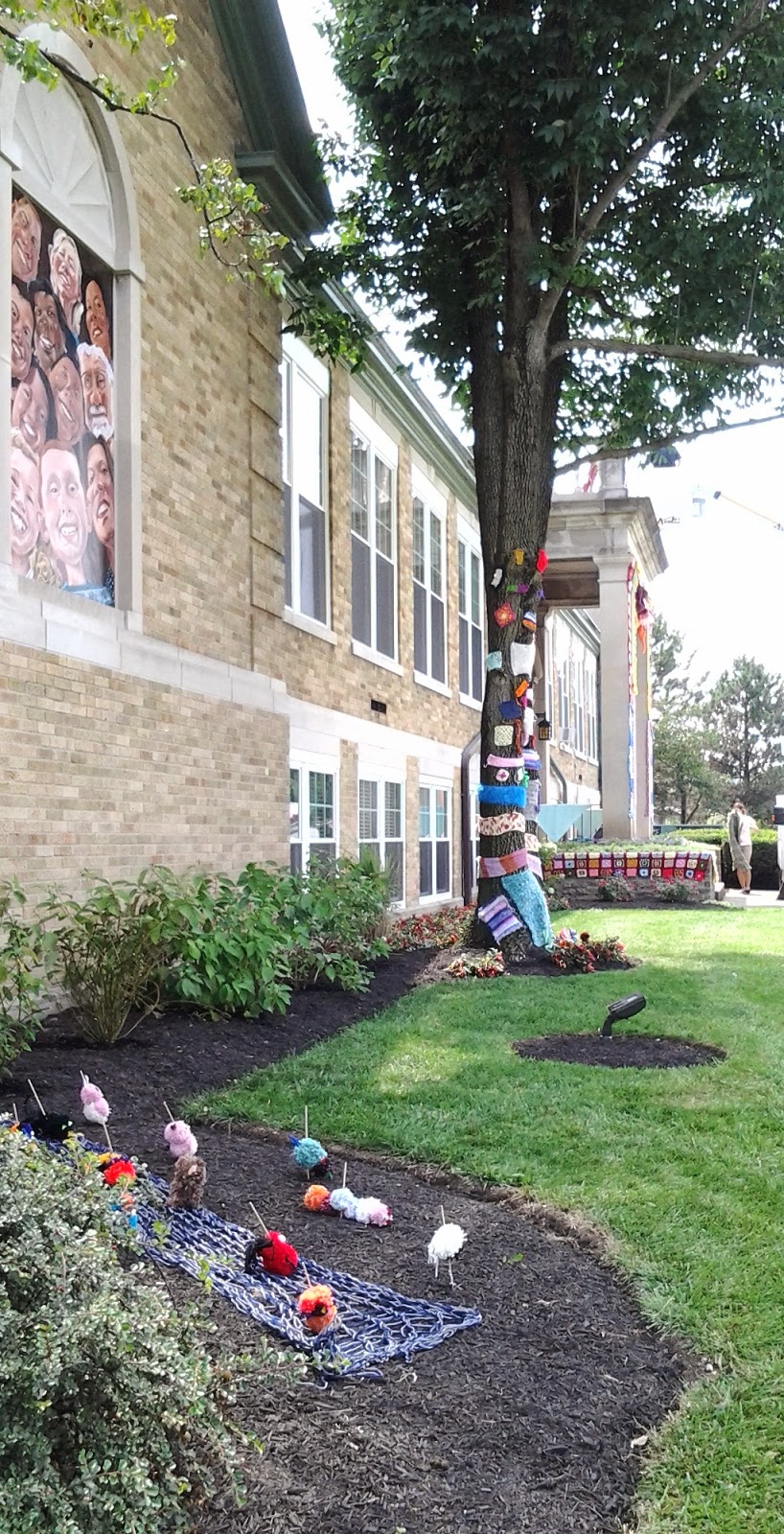 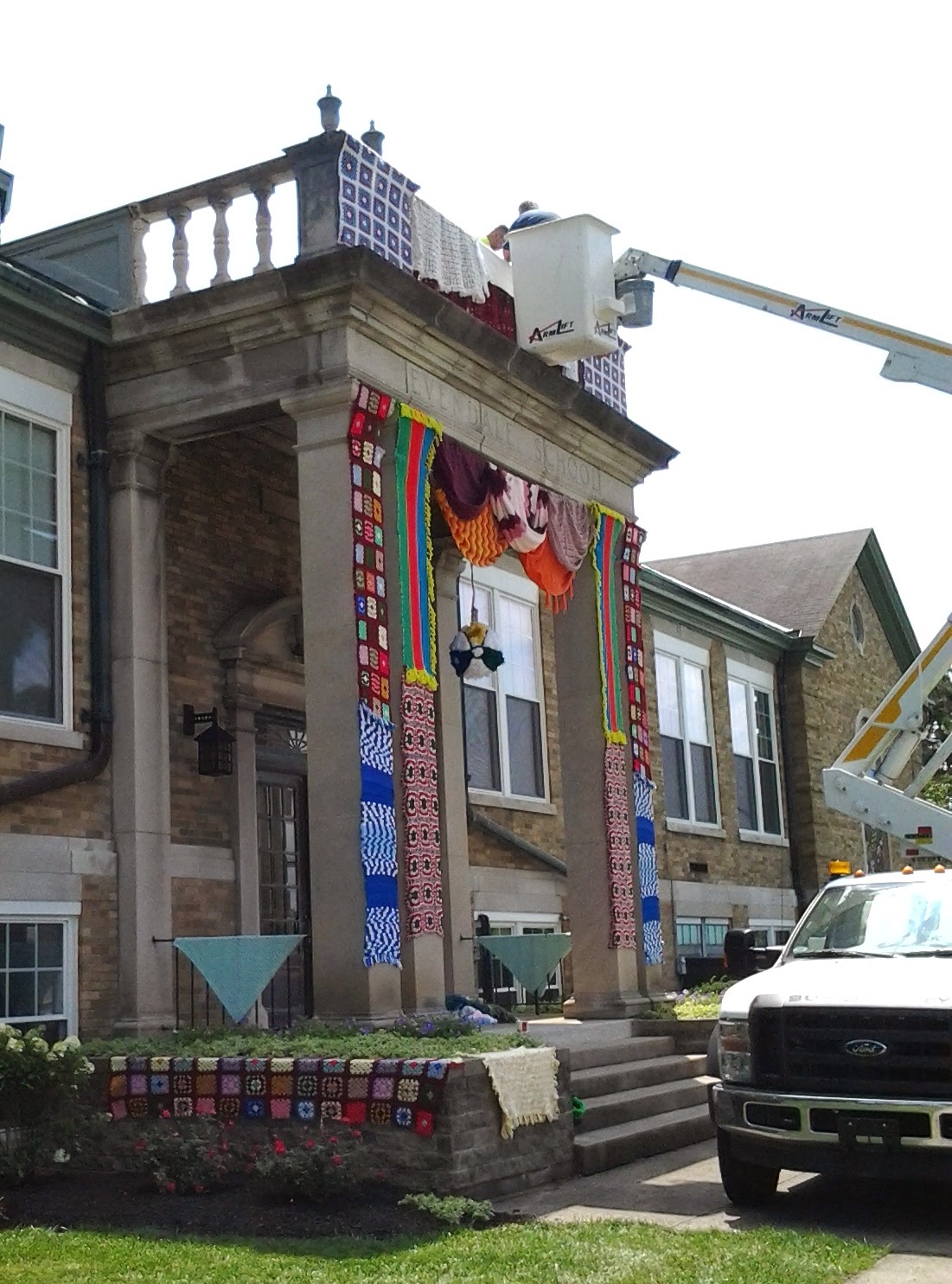 Yarn Bombing down the street!
Posted by T.M. at 6:46 PM No comments:

Finally. A post from me. The last 3 weeks have just been rather surreal since the accident. Poor Honda was totalled and towed away. Very sad. It was a 1990 but still had a life of over 100,000 miles left. Thank G-d that no one was hurt except the car. The kid's insurance company (Grange Insurance) was great to deal with from the agent calling right away to giving us a rental car for plenty of days. Took forever to decide what car to buy since we weren't in the market for one but finally got everything all taken care of and done.
But it was just an odd feeling and nothing seemed right until it was done.
I didn't even get much knitting done for the first several days but have now gotten lots done. 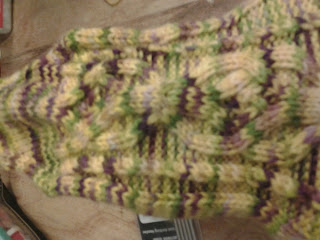 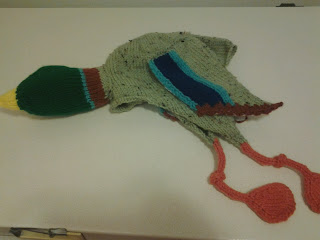 It's the Duck Hat by Emily Ringleman and everytime I walked by it I got freaked out 'cause it looked real!
Mom wanted a mitered vest so I designed this. Used odds and ends of worsted weight acrylic that was lying around and she is really pleased with it. Wears it all the time. 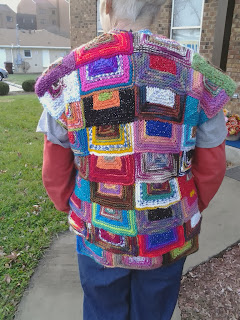 Very bright but the upside is that it goes with everything. Not too many things you can say that about. 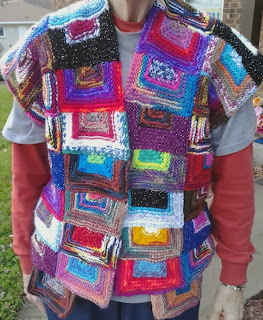 Well, I was going to post the other day but got rear-ended while waiting to turn into my driveway. Praise Jesus that everyone is okay but my poor Honda is undriveable and will have to get a new car. Dealing with everything just wears you out so I'll post more soon. I was going to upload a photo of the car but this doesn't want to upload photos for some reason. Haha. I 'll show it....I'll go through Google Chrome. 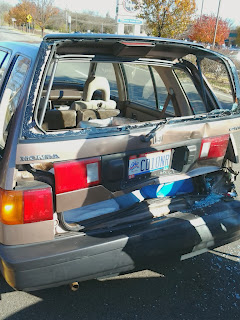 Finally sat down to make a post. I've been busy trying to get some knitting done before the cold weather hits. Well, it hit today. Tonight we may have a few flurries and in the low 30*s but it's about time. I was soooo tired of the hot weather that the cold is a relief. Been having the slow cookers going because I've been craving stews and soups now that it's getting fall-like.﻿

Here is the "chick'n" noodle soup that I made using Beyond Meat. It's a great product, vegan and gluten-free, and so versatile. I just love it. 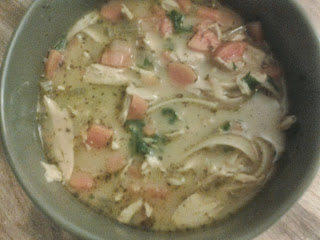 Have finished a few knitting projects.
A sweater for myself. The shawl is for mom. She really wanted it and seems to be really happy with it. I'm trying to design a sweater using the same mitering. 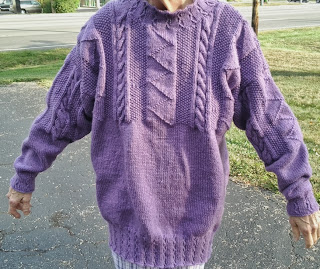 Mom is modeling the sweater and she's much smaller than me so it doesn't fit well on her. 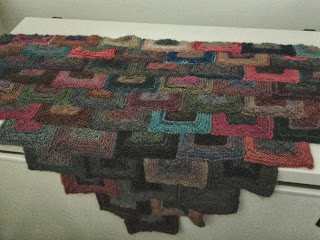 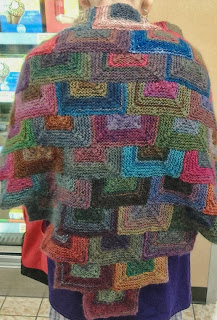 This pattern is from Lion Brand www.lionbrand.com, and it's free. Very easy and addictive. I made this one larger than the pattern because she wanted it nice and long. 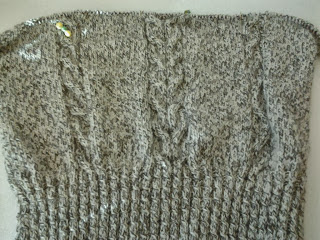 Right now I'm knitting on this. It's the Central Park hoodie and I'm trying to knit it for the 30 day sweater challenge (www.30daysweater.com) and I have the sleeves to go and then seaming and the hood. It's rather boring (for me) and I'll be glad to have it finished and off the needles.
Okay. This is just a short post because I've got a lot of things going on right now, including being in a live chat right now. I'll write soon, I promise. Yes, yes, I know. But I will.
﻿
Posted by T.M. at 4:30 PM No comments:

Finally, the weather has broken and with it my ennui. Fancy, no? I have just been so lethargic that I 've not done anything but knit. I've hardly even wanted to cook except I do like to eat, so cooking is a necessity.
I've enjoyed these last two days...Friday was 65* and it was LOVELY! Had my first cuppa hot tea in quite some time. A nice coconut pu-erh from The Republic of Tea.
Since it's been so hot, my knitting has ramped up exponentially. Here are a few of the things that I've finished. 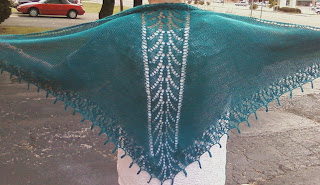 This is the Blue Angel Shawl that was the July mystery knitalong from Craftsy. www.craftsy.com 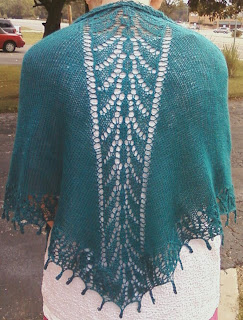 The socks are "Algernon" and I think the pattern is on Ravelry. Last year I made a sort of sock club of the year by pairing up patterns and yarn and put them in brown paper lunch bags and sealed them. This was one that I picked. Been working on them off and on for a few months. 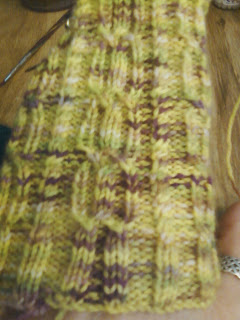 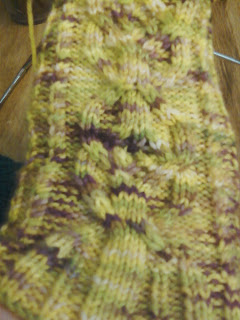 This is the hem of the Cornish Knit Tunic from "Indigo Knits". I am on the last several rows and then I can seam it up and finish the neckline, which is the same pattern as the hem.I had the pattern and yarn put away for several years because it looked rather intimidating at the time. Several different charts all knit at the same time. But now that I've done a few projects like that, it was surprisingly easy. 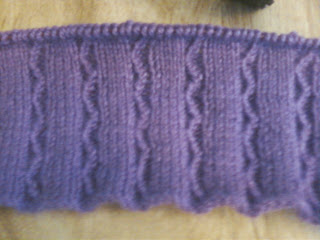 This is the Nexus cowl (sorry about the photo-I just got a new phone and I'm not very good with it yet. Oh, who am I kidding? I take the WORST photos and always have.) 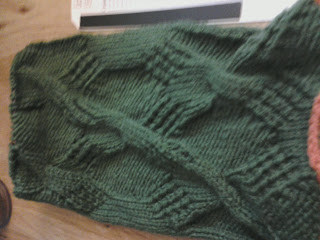 This is Spectra and it's for sis. She loves lime green and really liked mine and I had extra of the wedge color so here it is. 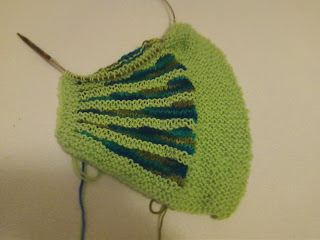 I did make some things in the heat. This is a decadent cinnamon roll pie (vegan) and it was SO good that I will make it only for special occasions 'cause none of us could stay out of it! 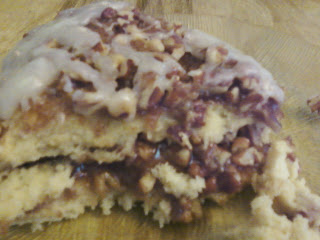 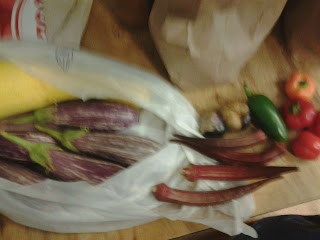 Loot from Thursday's farmers' market. The burgundy okra is my favorite right now-used it to make quinoa/bean gumbo in the slow cooker. And it's for a small cooker so it just makes enough for about 3 servings. Which is nice.

And the best is this...a yummy waldorf kale salad. I ate alot of salad and salad-y type dishes. 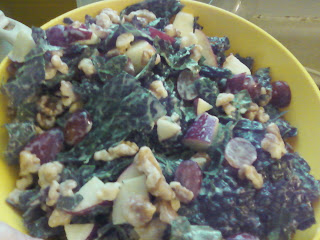 And a yummy pizza with homemade crust and fresh basil that I grew. Lots of veggies and Daiya mozzarella "cheese". So good. 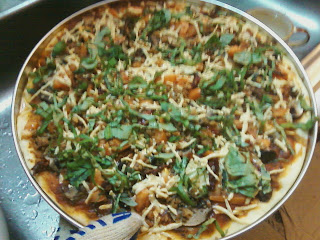 Well, I guess I did more than I thought. Bought some tv series on dvd for quite cheap and have been watching those while knitting. One of which was "Home Improvement". Forgot how cute that was.
Alright. I have Polish rye bread (with pumpkin beer and caraway seeds and shallots) in the bread machine and it's ready to take out. Enjoy the cooler weather.
﻿
Posted by T.M. at 4:40 PM No comments: 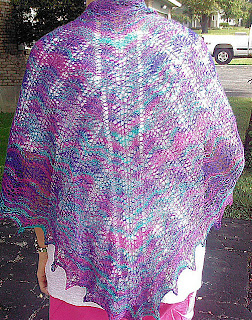 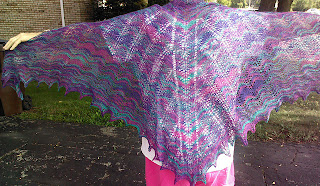 Clarus by Laura Nelkin and from Craftsy class-Mastering Lace Knitting.﻿
Posted by T.M. at 3:04 PM No comments:

T.M.
"If thous shalt confess with thy mouth the Lord Jesus,and shalt believe in thine heart that God hath raised him from the dead,thou shalt be saved." Romans 10:9 "In whom we have redemption through HIS BLOOD, the forgiveness of sins, according to the riches in His grace." Ephesians 1:7 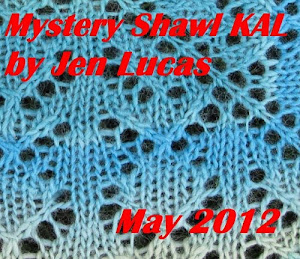 "I am Knitting Daily''